Recently Aprylle was appointed to the position of Ambassador at Large on behalf of the U.S. Route 6 Tourist Association. Many of you may remember Aprylle as the lady who in 2015 ran all 3,652 miles of the Grand Old Highway from the waterfront in Long Beach, California to Provincetown, Massachusetts which is located the tip of Cape Cod. She made the run to raise money for a youth center in her home town.       Don Doucette 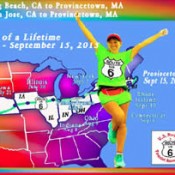 Gilbert-Route-6-Run-Finish-line-09192015 Provincetown, MA: Against all odds, Gilbert has completed her coast to coast charity run for disadvantaged children. April 28, she left her home in San Jose, running south along the Pacific on the California Coast Highway. 341 miles later, she turned her sights east. Running into the dawn, she left Long Beach (the western end of Route 6.) on May 11. Today, with 3,652 miles of Route 6 behind her, she has reached the Atlantic at the eastern end

September 15, 2015 Activity Update – US Route 6 – Coast to Coast for Kids will be completed today 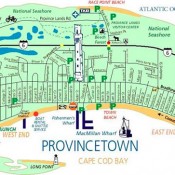 DATELINE September 15, 2015 Provincetown MA Aprylle Gilbert’s Charity Run Coast to Coast for KIDS 2015 will be completed today at the ‘West End Roundabout’ of US Route 6 at Cape Cod Bay about 3:00 PM EDST Aprylle will be greeted and welcomed by Provincetown and MA dignitaries, TEAM APRYLLE Member Partners, Fans and Supporters of her 3,652 mile run across America along US Route 6, benefiting disadvantaged KIDS. Aprylle’s RUN ACROSS AMERICA along US Route 6 to Provincetown MA 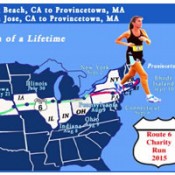 Gilbert brings her dreams of helping disadvantaged youth to Rhode Island today! With two short states ahead of her, San Francisco Bay area singer/songwriter Aprylle Gilbert is in the final week of her Charity Run for Kids Press Release: Sept 10, 2015 Connecticut – Rhode Island Border: In Connecticut, Gilbert was hosted in the homes of two Route 6 legends. Click the image above for the full PDF Press Release 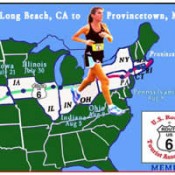 Aprylle reports passing through SOUTHBURY CT at MON SEP 7th at 1:30 PM EDST on her way to Provincetown MA Aprylle was hosted SUN night by Malerie Yolen-Cohen, Travel Writer and Route 6 Tourist Association Member, at her home. See Malerie Yolen-Cohen’s, SEP 5th article: The Huffington Post. http://www.huffingtonpost.com/malerie-yolencohen/aprylle-gilbert-running-c_b_8094104.html Aprylle’s RUN ACROSS AMERICA to Provincetown MA (3,652 miles) will be placed in the record books – NO PERSON has ever accomplished this previously. TEAM APRYLLE projects that Aprylle will cross the 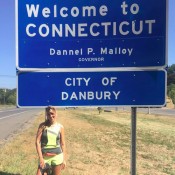 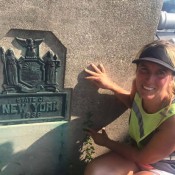 HAWLEY – A journey that began in May, has led Aprylle Gilbert to scour mountainous hills, pass-through ghost towns and inspire many as she follows one road from California to Massachusetts. Now, she has less than two weeks before her 3,652 run along Route 6 is complete. — READ MORE — [mappress mapid=”45″] 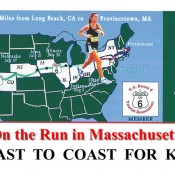